Family History
The Fairbanks Came to America from England in 1633.

Jonathan and Grace Fairbanks came to the Massachusetts Bay Colony in 1633 along with their six children. They spent time in Watertown until 1636 when they became founding members of Dedham and were granted 12 acres of land. Here they settled in their new home, built between 1637 and 1641.

Jonathan was a skilled tradesman and earned income for the family by making spinning wheels, a complex machine that everyone needed but few could build themselves. Along with his sons, he spent summers farming and became successful and wealthy enough to expand his property and hire servants.

When Jonathan died in 1668 he left his house to his eldest son, John. Like his father, John was mechanically inclined and a good farmer. He further expanded the farm and bought another property in Wrentham.

Upon his death in 1684, John left the Wrentham property to his eldest son and the Dedham house and property to his two younger sons, Joseph and Benjamin.  The two brothers divided the property and Joseph kept the house. 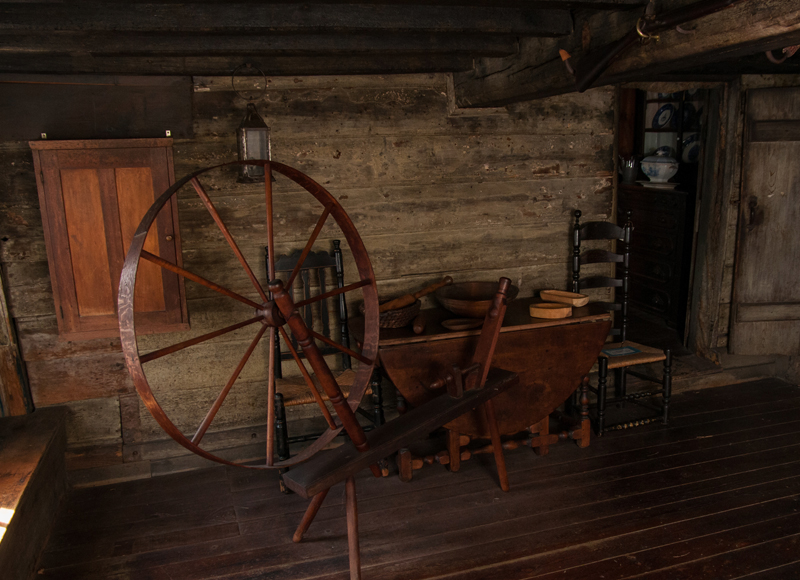 When Joseph died in 1734, he left the house to his son Joseph who in turn left it to his son, also named Joseph.  He owned the house briefly before selling it to his brothers John, Israel, Samuel and Ebenezer in 1755. Ebenezer bought his brothers’ shares and is responsible for many of the more significant additions and changes to the property. He lived in the house until his death in 1812, by which point ownership of the house had already passed to his son Ebenezer Jr.

Ebenezer Jr. continued in his father’s footsteps, expanding the family land to just short of 200 acres, the height of the family’s holdings. Unfortunately Ebenezer Jr. made some unwise investments and ended up with a sizable debt. Exacerbating his financial situation was his youngest brother Jason, who was convicted of brutally murdering his girlfriend in a scandalous, high profile trial and was hanged in 1801. This would tarnish the family’s reputation for years to come. (More can be read about Jason Fairbanks and his trial here: Part 1 & Part 2)

Rebecca was the last family member to live in the house, reluctantly moving out in 1904. On Rebecca’s departure, Fairbanks family members established the Fairbanks Family in America, Inc. in order to purchase the house and preserve it for future generations. Open to the public as a historic house museum for over 100 years, the house is maintained by the FFA through admissions, donations, membership dues, and gift shop sales.

We look forward to a great 2022 season! The Museum will open for tours on Fridays, Saturdays and Sundays beginning on May 1st, 2022. To schedule your tour click here. Hope to see you soon! Dismiss